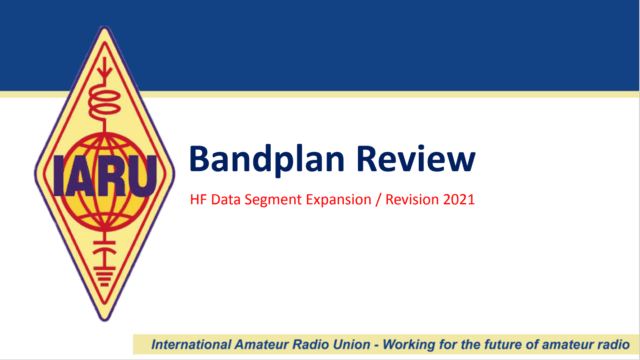 Over the past 18 month a proposal for an IARU HF Digital Mode reorganization has been undertaken by representatives of all three IARU Regions.

The objectives were to review the data modes usage of the Amateur Radio HF spectrum and propose changes that:

In conducting the review it was realized that it was necessary to update the manner in which the IARU creates its band plans. Accordingly, the IARU’s band planning definition toolkit were redefined, and additional data mode definition characteristics has been added to help separate activities that are fundamentally incompatible within the data mode family.

With the band planning process updated, the proposal then revised the band plans of all three IARU Regions, focusing on the data sub-bands and taking into consideration:

The team also took the opportunity to harmonize the band plans of all three IARU Regions to the greatest extent possible of course.

The proposal is now being discussed in the relevant committees.

Materials on this website may be subject to copyright.